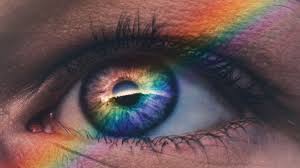 Usually people chicken out when they are confronted with problems or situations they or those that can help them have no solutions to. They become intimidated, confused, helpless and hopeless at such times. They are brought down on their knees, begging their adversaries, thereby strengthening their oppressors. This usually worsens their situations. But if they can see the Invisible and Invincible, Who is the only Omnipresent, Omniscient, and Omnipotent on their side waiting to be recognized, they could have not only intimidated, confused, rendered helpless and hopeless their adversaries, but they would have bluffed their enemies threats and put them to shame. They would have resisted death, Satan, sin, self, society, sicknesses, and every other adversary. And they would have fled from them.

A man who is living right, having the excellent Spirit of God, a child of the King of Kings- the only Invisible and Invincible, whose Spiritual eyes are opened to see appropriately is a terror to all his adversaries. He is ever a conqueror, always a winner and an overcomer. His face is always bright with joy because every challenge in life is surely going to end with visible proof of the reality of the Invisible and the Invincible on his side.

This is what gave rise to Moses despise of the wrath of Pharaoh.  He saw somebody mightier than Pharaoh ever on his side, and so the threat of Pharaoh became a non-issue. The threat of your sin partners or unbelieving relatives/employers or the goddesses or cult members or killer diseases or any other being or thing you can liken to Pharaoh will become a non-issue as from this night as you see in the proper way the Invisible and Invincible in Jesus name.

Because Elisha=s eyes were opened, he was not only telling the king of Israel the evil and secret plans of the king of Syria, but called off the bluff of the king of Syria to think that he can frighten and arrest anybody he wished because of his military might. He, not only blinded his army that were sent against him, but gave them over to the man they have been plotting against to feed them. They were so ridiculed by that act that they never plotted against Israel nor sought to hurt Elisha all the days of that man of God whose eyes were always seeing the Invisible and the Invincible. Like Elisha, as you see the Invisible and the Invincible appropriately and obey His servant always, your eyes will be  opened to see as He sees all the evil plots against you and your people, and as you call on Him, He will not only frustrate them, but will blind and stupefy them in Jesus’ name. See how close and big the Invisible and the Invincible is rather than seeing how close and big your visible/invisible but vincible needs are.

Your prayer today is to ask God to open your Spiritual eyes always so that you can the ever able and willing helper/deliverer- the Invisible and the Invincible (Eph. 1:17-18). For as you consider this God appropriately this night and present your dreams to Him, your lips will be filled with songs of praises because of what will become your lot in Jesus name. Rise up and call on the Invisible and the Invincible.

So that, just as sin reigned in death, so also grace might reign through righteousness to bring eternal life through Jesus Christ our Lord.
Romans 5:21